Durham Middle School Coach Shines On and Off the Field 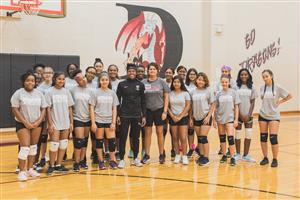 Jo Overstreet is a coach, P.E. teacher, world champion and everything in between

Sept. 24, 2018 — Five months ago, Jo Overstreet found herself participating in a flag football tournament in Arlington, Texas, showing off her athletic skills and football prowess. She was hoping for a chance to make the women’s USA National Team for the biennial International Federation of American Football (IFAF) Flag Football World Championships to be held that August in Panama City, Panama. In late June, Overstreet received the call she had been hoping for, waiting for — an invitation to represent the United States in a sport she loves and proving her hard work had paid off. When August finally rolled around, life became even sweeter. The women’s USA National Team went 5-0 during the global tournament, including defeating Panama, the defending world champs and host country.

Overstreet could now call herself a world champion. It was something else she could add to her list of athletic accomplishments — she had played college basketball at the University of Houston and professional basketball in Germany and England.

But aside from being a world champ, she held another title that could rival as her biggest accomplishment — coach and physical education teacher at Durham Middle School for the past eight years.

“I was getting ready to go back to England when I got a call for this job,” she said. “My stuff is still in England. I never went back, and that was in 2010.” 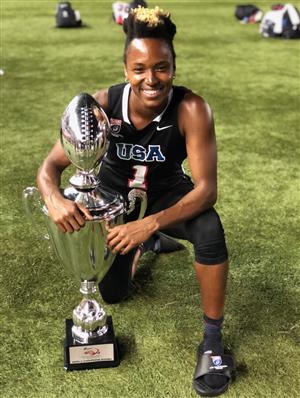 Overstreet learned about the Durham position from her best friend’s coach who previously worked for Lewisville High School. At the time, despite her love for sports, Overstreet hadn’t considered a career in coaching or physical education. In fact, Overstreet initially pursued a degree in architecture before deciding it wasn’t for her and switched her degree program to kinesiology.

While she wasn’t quite ready to quit playing professional basketball, the injuries began to mount and Overstreet decided it was time for a career switch. This new career may possibly be the most rewarding.

“I couldn’t imagine not being in this environment every day,” she said. “I didn’t know I would love being around kids like that and seeing them grow and seeing the inspiration I have on them.”

She added, “All the things I’ve done in life, to be able to pass it on to them and them be able to use it and be successful? That’s what drives me to be here every day — to see them succeed.”

One Durham volleyball player said Overstreet made an impact from the very beginning.

“In sixth grade, I had never really played volleyball before, but I wanted to learn,” eighth-grader Olivia Kabano said. “I know it’s hard to teach volleyball to someone in a year, but Coach really helped me out and I made ‘B’ team. She really embodies someone who cares for you."

Kabano described her coach as kind and loving and said Overstreet’s commitment to their volleyball team means a lot to her.

“It’s really cool because I’ve seen commercials and campaigns about it (the USA National Team),” she said, “and seeing that, and knowing that our coach is right here teaching us volleyball when she could be somewhere else, doing something greater is just heartwarming.”

Not long after joining the Dragon family, Overstreet was at a flag football tournament for fun when she was approached by Adrenaline, Dallas’ women’s 7-on-7 team. That’s when her athletic career took a new turn.

“They said, ‘Hey do you want to play with us?’ And, we’ve been together ever since then,” Overstreet said.

Since joining the team, Overstreet, a wide receiver, has traveled to play in tournaments across North America during her time off from work. Not only that, but because of her skills and athletic abilities, she has also been asked to join other flag football teams like Atlanta’s Reloaded and Mexico’s The Wild Whites.

“If you want something,” Overstreet said, “you just have to go for it.”

As she continues with both her coaching and flag football careers, Overstreet has realized her students inspire her as much as she inspires them.

Durham Middle School is a Lewisville, Texas middle school in the Lewisville Independent School District. Follow Durham on Facebook and Twitter to see more student experiences throughout the school year or visit LISD.net for more information about our district.